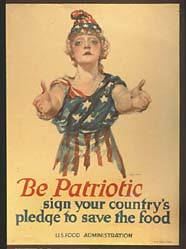 Governments have been using propoganda for centuries to either rally the masses to their causes or put down polical opoions. The invention of the printing press and the developments in technologies since that time has made it easy to use propoganda as a weapon. One of the best tools to achieve this end is the poster. 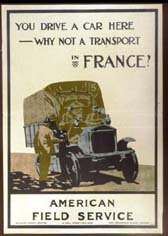 With advancements in printing technologies the poster could be massed produced my the thousands and distributed to all corners of a country or around the globe. The poster could be placed in a static location to maximize their effect. What better way to rally troops to a cause than to place a poster near the from enterance to a town 's main marketplace. Here the public is sure to see and respond to the needs of their county particularly in time of war.

When the United States entered World War I, artists and graphic designers where called up to rally the masses to the defeat of the Germans. They were charged with the task of designing simple ad campaigns to rally the support for various caused, such as food conservation as the poster above advertised. The recruitment poster was a very popular way to intise men to join the service. Other campaigns were aimed at conservations of resourses needed to fight a war.

Never was the propagnda machine more important then during the second world war. The surprise attack on Pearl Harbor left the United States unprepared. Recruitment and resourse conservation campaigns had to be quickly put in place. Poster sprange up in every bus stop, train station, public buildings and telephone poles all over the United States. It was not uncommon to see the poster (on the right) on bulletin boards in the local market. These propoganda poster help to defeat the Axis powers and united a country never before seen since the Revolutionary War.
With the onset of the televison, the propagnda poster declined as a means to rally the masses. Designing and producing 30-second spots where far more cost effective then the poster. Printing, distributing, and hanging posters took far more time than a T.V. ad. Fewer propaganda posters are used today. But who could argue that the prpaganda poster was not an important tool in winning the first and second world wars. The artist and graphic designers of that periond deserve recognition for their part in the success against a common enemy. They played their part very well.