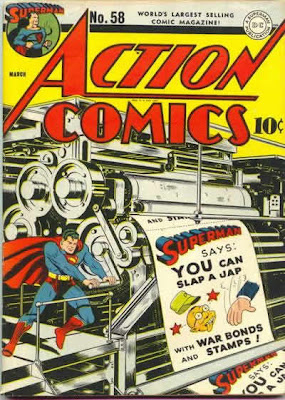 Since the very beggining, higher powers realized the strength of propaganda as a means to resources of not only labor, but lives and a general prosperity. Countries could unite, wars could be won, and "peace" could be spread throughout the lands. Clearly, the concept was to keep the message short. For everyone to get it, the slogans were kept simple. The masses' emotions were manipulated to bond together and either accept or reject ideas. The icing on the cake was to recruit at an early age when children were still curiouse and full of wonder. Not to mention the fact that they were also unexperienced. The rule of thumb was to "dumb it down" so everyone could agree. What better audience than young children and adults easily swayed by their favorite superhero?! Every body loves Superman. He wouldn't lie to you. He knows what he is saying. Covers to comic books were regularly used to spread propaganda throughout the 1940's during World War II. To put it into perspective, a total of 100 million soldiers fought during this war (from all countries) and casualties were as high as 60 million. Those are serious numbers.


Micha Ian Wright, creator of the anti-war posters collected in
You Back The Attack! We'll Bomb Who We Want!
www.beatrice.com/archives/000403.html 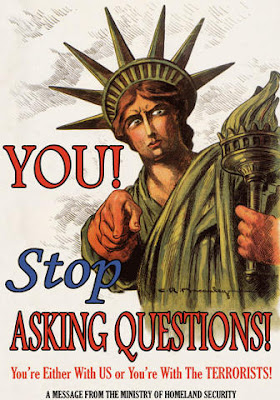 After seeing this poster and many more like it, I feel like the subtalty has vanished. Now more than ever, very clear lines have been drawn. You're either a part of a movement, or you're against it. Being against something like this can single you out. People don't like being on the other side of the fence. They want to be invisible amongst the group. In a time of "terror" and paranoia, this seems to be working well. Without full access to the truth, one can't help but jump on the wagon that's being led by a blindman. Its hard to form an opinion given no facts of the matter. With statistics and images of the current war being shrouded or even hidden, its very easy to forget what's going on. These one-sided movements are easy to accept. What a shame that strategies like this are still being implemented in the age of information. This is sad but true.
Posted by oscar felan at 8:26 AM