Political propaganda became an important way of communications during World War I. Political propaganda was the official communications to the public that are designed to influence opinion. The information may be true or false, but it is always carefully selected for its political effects. Our book states that honoring soldiers and creating a cult around national leaders or symbolic figures were two important functions of the poster; ridiculing or disparaging the leaders of the enemy forces was another. Many posters emphasized the publics contribution to the war effort by appealing to patriotic emotions. Propaganda is used to gain support of the public. Today we are also faced with propaganda that shows non-support of our government or certain government officials. 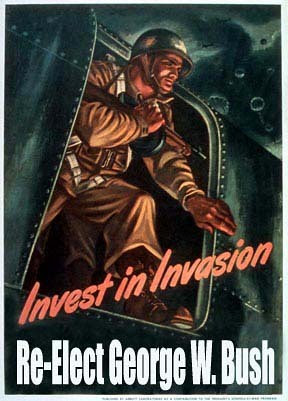 I believe that this poster of political propaganda is a statement being made by people that do not want George W. Bush re-elected. Many feel as though Bush has kept us at war longer than we should be. 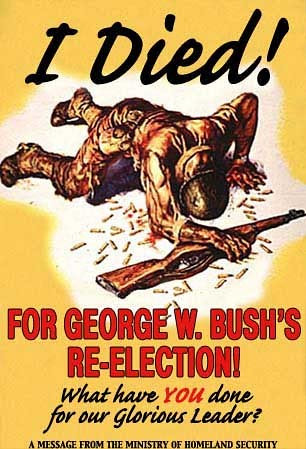 I believe this is a statement that says Bush is just letting our soldiers die in a battle that has gone on for too long. A soldier has sacrificed himself for our leader and questions us on what we’ve done.

Posted by DeShawna Provence at 4:40 PM

What do you think of a lot of artists appropriating past posters into current propaganda?