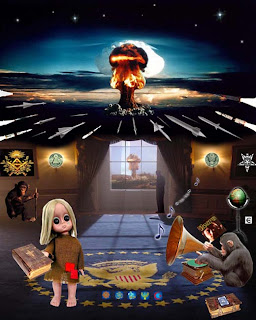 I'm sure that everyone remembers Y2K when it was believed that the world would end or at least all of our computers and electronic devices would fail. Preparations were made and ...nothing happened. The same incedent happened 1000 years before that and just like with Y2K ....nothing happened. It wouldn't suprize me if it occurs again in the year 3000. Don't get me wrong, im not saying that the world won't come to an end im just raising question to all of the hype about the end of the world. Do you think that people would be half as scared of the end of the world if we didnt have all of the images of the apocalyps?


Although, still proficiying doom and destruction the images of the apocalyps have changed over the thousands of years. They have gone from being line by line illustrations of the scripture to being more imaginative and almost photographic images of what it would be like when the end finally happens. In the 1000's it was believed that the apocalyps was to be God raining his judgment down on the unbelievers in the form of four horsemen as illustrated in Megg's History of Graphic Design fourth edition image 4-13 in chapter 4 on page 52. The pictures created in 1000 show the apocalyps playing out word for word with the scripture like the image 4-14 in chapter 4 on page 53. The scripture talkes about the sun and the moon being divided into pieces and there it is in the painting.


Today, the images we see of the apocalyps are very different. They are not as litteral as the images from 1000 years ago. It is like ,after experiencing the first end of the world scare where nothing happened and the new interpretations of the scriptures were thought out, they dove deeper into the meanings behind the scripture. Now, the images we see of the apocalyps are not limited to four horsemen and divided celestial spheres rather they include images of war(represented by bombs and rubble), pestilence (represented by natural phenomenons),famine and death (represented through the skelital creatures and the starving people garbbed in rags). Most of the apocalyptic images we see today are post-apocalyptic. This might be attributed to the churches desire to get people to repent so they do not have to experience the aftermath.
Posted by tiffany morgan at 11:30 AM