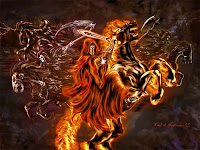 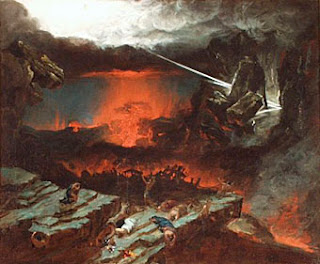 As far as what people believe and the apocalypse, not much has changed from AD 1000.  However, technology was invented a very long time after the era of which illuminated manuscripts were produced.  The use of computers and even photoshop enhance the look of images created to show apocalyptic happenings.  In AD 1047, only two dimensional representation of objects were created. The images of today are far more realistic-looking due to the use of three-dimension enhancing tools on the computer.
While the belief is much the same, the subject matter of images I found are also very similar.  Horses and fire seemed to dominate what the vision of the apocalypse may include.  And due to the subject matter the colors are similar...red and orange.
Posted by Jaymi Allen at 11:22 AM