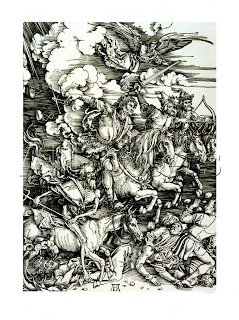 Apocalypse. The name comes from the Greek 'apocalypses', meaning unveiling, revelation, particularly of divine nature. Revelation of John, written at the end of the first century A.D., foretells us of the end of the world and the coming of the Last Judgment, the destruction of the wicked, the overthrow of Satan and the establishment of Christ's kingdom on earth. Back in "old days", artists visions of Apocalypse were greatly influenced by their religiouos backgrounds.

The sequence of fantastic images - the author's visions - forms a cycle of themes that are found in fine art.
For example, Albrecht Durer in his woodcut print "The Four Horsemen of the Apocalypse" (1498) showed the end of the world as it was described in the book of John. I believe that the general concept of this work of art can still be easily understood nowadays. Although, to get the idea about death and rebirth and the agents of divine rage (Conqueror, War, Famine and Death) one may still need some specific religious background.

As times change and humankind develops more sofisticated means of self-desctruction, visions of apocalypse change. Should you show medieval people a picture of the "magic mushroom" (symbol of nuclear explosion), it would mean nothing to them. Meanwhile, the image has become one of the universally recognized symbols of Apocalypse. A modern person of any race, age, ethnicity or cultural background would not think twice about the meaning behind it. 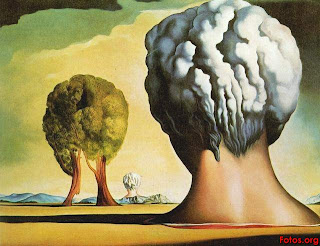 One of the most famous artists that was inspired by the destructive power of this perfect weapon was Salvador Dali. In his paintings (THE THREE SPHINXES OF BIKINI, Galatea of the Spheres, Raphaelesque Head Bursting, est.) he tries to depict deadly explosion more humanlike. These are works of political importance as well as philosophical.

The images of Apocalypse change with the society: as common believes change, change the pictures. We used to imagine the end of the world as something triggered by supernatural phenomena, while it looks like the humankind has reached the level of being able to destroy the world on its own. Artists sense these changes and reflect them in their work. They are constantly trying to depict some of the major concerns of the humankind, to find some answers and to change the world.
Posted by Olga Ledyan at 12:08 PM