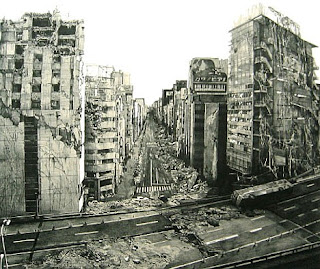 I guess if you were to compare apocalyptic images of to day as apposed to the years 1000 the mane difference would have to be the biblical references. A lot of the older images tend to deal with the four horsemen of the apocalypse (War, Famine, Pestilence, and Death). But now a day you see images of destroyed buildings, ruined cities and so on. Weather this has anything to do with the fact that the church dose not have as much power as it did back then or not I do not know. Or perhaps it might be that back then people thought of the apocalypse as something the only god could bring about, it was to have been a time of judgment where god would pass judgment on mankind. Now with the invention of the atomic and hydrogen bomb man kind has the ability to destroy it’s self and the planet along with it. With everything that has been going on in the Middle East recently the possibility that we may create our own apocalypse is very real and frightening. Or perhaps every thing is the same as it was back then, and people merely represented war and death in a different manner. I for one would prefer not to find out any time soon.