When looking at the pictures of old for the apocalypse, one has to wonder what they were used for. Here we have the picture of the four horseman of the apocalypse. One of the most recognized pictures depicting the end of times. The four horseman, which include, death, pestilence, famine, and war, are the first four plagues to hit earth during the biblical tribulation.

Today though, these pictures have very little meaning to us. People who are religious still find these images intriguing, but do not find them frightening. The pictures that people have created today of the apocalypse, though can strike fear in today's society. 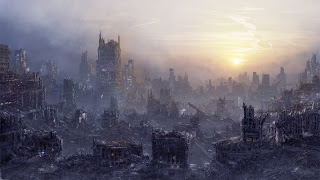 Images such as the one on the right can bring a grim reality upon us. This image depicts a city after a disaster. We don't know what this disaster could have been. It could have been a raging fire, or a massive tsunami. This could have also been the product of a nuclear explosion. While one may wonder what could have been the cause of this destruction, we still realize in the back of our minds that these ideas are quite possible. This is how the images of the apocalypse today scare us. We know that in the back of our minds that there could be the possibility of this really happening. The images hit closer to home, and make us wonder when it could happen. 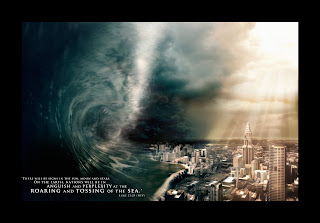