Censorship of German Painting in the 1930's 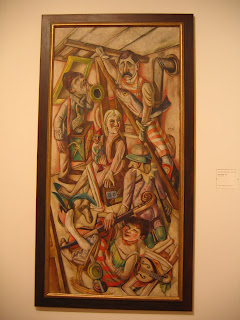 Much of the destruction that WWII brought to the world was mostly seen with the massacres and battles staged during that era. Art, nonetheless, was also brought into seclusion and only certain artists were allowed to portray their paintings and have a career. Consequently, many German artists that are seen as masters of the art in today's society, were put into shadow by the Nazi power in Europe.

One of these German artists was Max Beckmann. Some of his paintings were put in the "Degenerate Art" exhibition, where other important artists' works were also hidden from the world. This exhibition showed an act of iconoclasm, for the Nazis prohibited new styles or art that portrayed unusual and imperfect forms and other foreign styles, such the Africans' art; some of this art was later a big influence for the art style of expressionism and important artists such as Matisse and Picasso.
With this new exhibition, The Nazis, under the rule of Hitler, decided to portray art with Greek and Classical ideals, prohibiting styles that were not influenced by classical art.

One of Beckmann's painting that was put into the "Degenerate Art" exhibition was "The Dream." one can see that the artist didn't use any Classical/Greek ideal. Instead, he used juxtaposition and confusion to portray an unusual fantasy. There is no space or individuality, only sadness and horror when looking at the faces.
Posted by Laura at 4:00 PM