Rebirth of Humanism and Renaissance in Italy 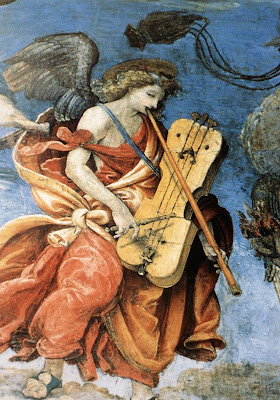 Assumption and Annunciation (detail)
1489-91 Fresco by Filippino LIPPI,
Santa Maria sopra Minerva, Rome
http://www.wga.hu/frames-e.html?/html/l/lippi/flippino/carafa/index.html
In 15th century Italy cities slowly became economical and cultural centers with universities, printing presses, manufactures, banks and religious shrines. Rebirth of classical Humanism in particular and Renaissance in general was possible only because of certain scientific researches, invention and innovation. Scholars rediscovered, translated and then printed out the studies of the ancient philosophers. This ‘old-new’ humanistic theories originally were focused on individual that tries to reach the perfection in all possible skills - to become a perfect men meant to become a God or at least to be equal to God. "It has been said that Greeks made their Gods into humans and humans into Gods" (F. Kleiner, C. Mamiya ‘Gardener’s art though the ages -I’, 91)
Art at that time was mostly created by commissions and under the patronage of whether church or new raising class of rich elite. The sign of a good political or spiritual leader was an ability to recognize great art and great artists. It became some sort of a fashion for the high society and later on for middle class to commission art: own a devotional image or order a portrait. Also from ancient Rome leaders gain new mean for use of art as propaganda. “…the hundreds of artworks the Medici commissioned reveal the family’s interests in humanist ideas and its concern about its public image” (F. Kleiner, C. Mamiya ‘Gardener’s art though the ages -II’, 472)
Science gave the artists and architects many useful tools to perfect their work such as mathematical study and explanation of perspective and proportions, rediscovery of new materials like concrete, mirrors and lenses etc. By studying these techniques and applying them to their works they could and did reach perfection. Even if the artists were not directly involved in the philosophical debates they undoubtedly heard and absorbed the humanistic ideas from their patrons. Some great masterpieces by DaVinci or Michelangelo were considered being created under the influence of holly spirit. So to some extend the artist that created such work was viewed as if not a God at least a Saint.
Today society readily uses art and artistic production especially in propaganda and advertisement fields. Scientists also deliver newer techniques and materials. However, even really good artists are definitely not treated as masters rather like craftsmen. I think the main struggle is to find a good philosophy that would awake in society the need and respect for the art and artists
Posted by Olga Ledyan at 11:42 PM