David Hockney's theories. What are the implications for the artists and art historians? 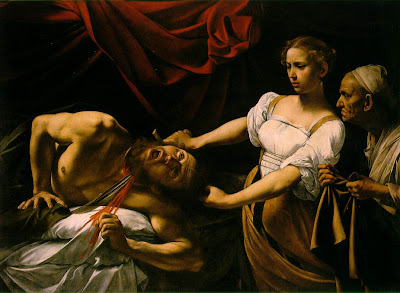 'Judith Beheading Holofernes' by Caravaggio, Michelangelo Merisi da
c. 1598 Oil on canvas. 56 3/4 x 76 3/4 in.
Galleria Nazionale dell'Arte Antica, Rome
http://www.artchive.com/artchive/C/caravaggio/judith.jpg.html
The history of artists tracing the live objects is going far back into the cave paintings. We can mostly see the traced hands and some times animals back then. Next famous example would be the Egyptian Pharaoh’s death masks. So if the artists in different eras were interested in brining some part of reality into their art, it seems only natural that, in more sophisticated time of Renaissance, artists would seek for more sophisticated and up to date techniques such as mirrors, lenses, and dark rooms.
As for the ethical part, like, whether one should even consider using science and scientific innovations for the art production, the history clearly shows that art and science always go head to head. Classical Greek beauty is based on "golden mean" that is pure mathematical proportion. Roman dome structures were possible because of the invention of concrete. And nowadays artists readily use computers, printers, scanners and so on. Why would anyone expect that average artist or even average man would be so much different, taking in consideration human nature...
Back to David Hockney. Being successful modern artist working far away from classicism he still admire the perfectionism of Renaissance paintings and painters. Probably, for the same reason we all do: high degree of realism and amount of details in lighting, proportions, anatomy, decorations, ect. Nevertheless he could not help it wonder what caused this sudden change in painters' skills after 1420th?
I personally am glad that David Hockney took his doubts further and did full research. His theories show not just the techniques that were used, but rather general demand of society to be remembered and depicted ‘as is’. It gives a missing link to art historians. While talking about real masterpieces, it is obvious that time, that artist saved by tracing, was spend afterwards on perfecting or inventing the individual style (mannerism, chiaroscuro, etc.). By hiding the tracing technique and revealing to the world only ‘true to life’, vivid paintings, artists received more admiration from the general public and more money. Overall an artist obtained more personal freedom; and only spiritually free artist is capable of becoming a great master.
Posted by Olga Ledyan at 11:17 PM