What has been photography’s impact on the world of fine art, illustration, and graphic design?

Photography has made a major impact in all art forms including graphic design, illustration, and fine art. Some might say how has photography not affected art? I believe photography is an art form in itself. Photographers use some of the same tools as graphic designers and other artists use. They use color to not only enhance their “art” but light to add depth. As did other artists such as Leonardo Davinci. Although upon its arrival artists felt threatened that this “light drawing would make an artists need obsolete.

Although before it was possible to print photographs, photography was used as a research tool in developing wood-engraved illustrations. The ability for photography to document a moment in time allowed illustrators to capture a moment in history. Freedmen on the Canal Bank in Richmond, by Mathew Brady, seen below, is an example of illustration involving photography. During the 1860’s and 1870’s these wood engravings drawn from photographs were very popular and became a use for mass communication. Since the means of reproduction was not available for photography Magazine’s and newspapers turned to illustrators to capture the moment for all to see. 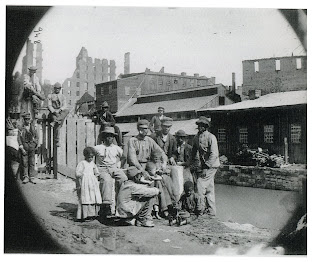 Freedmen on the Canal Bank in Richmond, Mathew Brady

The camera was used as a way to capture a moment. Artists took full advantage of this in order to capture the perfect scene or moment. Photography accurately reflects the external world, allowing for a precise and repeatable image. This allowed artists to study their subject and get a more accurate perspective on their work. As photochemical production evolved and replaced handmade plates, illustrators gained a new freedom of expression. Photography gradually monopolized factual documentation and pushed the illustrator toward fantasy and fiction.

Photography and graphic design have an amazing relationship. Unlike the relationship with fine art graphic designers embraced photography as an improved way of conveying their point and allowing for easier communication to the viewer. With photography you are able to look at an advertisement or an event poster and know exactly what the point the designer is trying to communicate. Although graphic design without photography in some cases is just not the same, it's like it’s missing its soul. Try to imagine designing an ad for a new car company. Yes, you could illustrate an image of a car but it’s just not going to communicate as well as a photo would. Most modern art is linked to photography in some way.

Posted by Anna Stanhope at 8:57 AM