There have been images throughout history involving the subject of the apocalypse. Among these images are listed in chapter four in our textbook. One image in particular Beatus of Fernando and Sancha’s version, created in of A.D. 1047, was much different than other versions. In this version (shown below) schematic figures are acting out the final tragedy in a hot and airless space created by flat horizontal bands of pure hue. Traditionally the Four Horsemen were portrayed traditionally of war, famine, pestilence, and death. The Four Horsemen are traditionally riding forth to unleash terror upon the world. In contrast from traditional versions, Beatus of Fernando and Sancha’s interpretation of the Apocalypse shows the first horsemen as god’s envoy, whose arrows pierce the hearts of non-believers. 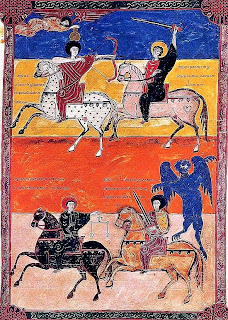 Much like earlier versions such as Beatus of Fernando and Sancha’s version, even in the present 21st century images of the same basis are being created and shown every where. Images of the same apocalyptic nature can be seen on movies, CD’s, and video games. Of course these are just a few of the places these images can be spotted. A few of my favorite images such as the Resident Evil Movie Poster (seen below) shows are desalinate world of barren landscape. Although the color schemes, and medium are different there meaning is much similar. Both of which were created to use as a fear tactic; non-believing Christians and extinction of the end of the world. Many apocalyptic images have been used throughout history as a scare tactic to make people think of their sins and being right with god. 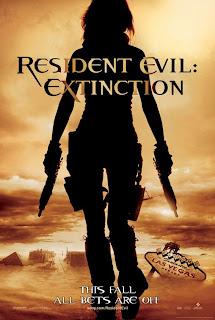 Among other images that have a similar premise is a CD album by the band Muse (shown below). It shows four men dressed in retro suites sitting around a table in the dessert. They are playing with four toy horses. This album cover not only has a very similar color scheme to the Beatus of Fernando and Sancha’s version, it also takes place in a red dessert like landscape. The men’s intentions at the table are unclear however the striking resemblance to the setting in the much earlier version is uncanny. 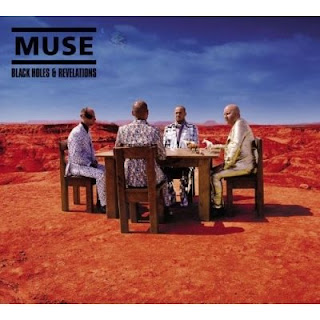 Posted by Anna Stanhope at 1:18 PM