Political propaganda from the world of graphic design today

When a graphic designer begins a project, their goal is to communicate a message through a functioning design towards a target audience. In the case of propaganda, the goal of the designer is to sway one's opinions. By creating something eyecatching to those who are confused on a subject or neutral on a subject, if forces them to process the information they are looking at.

For this image, the graphic designer took a classic war propaganda poster and changed the message. Familiarity is comforting to the the eye for most people, so it draws viewers in. This propaganda targets internet users on a very specific level. The "Bad Pitch Blog Petition" is a subject that will affect it's viewers strongly because obviously if they were at this website that the poster was found then they know what the petition is really focusing on and can therefore be persuaded to sign the petition. It's arguing for one outright cause. 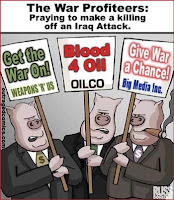 This poster is successful because it is an idea that many people are familiar with and a subject that many people are highly passionate about. The statement of the poster is very clear and the colors set a specific mood. It doesn't state a lot in words but the art and color says much of what the poster is about. If someone couldn't read English they would still probably know in general what this poster was trying to say;maybe not that it's about a war but that it is about the rich getting richer... a pig smoking a cigar in a suit is never a positive statement in my opinion. It is very one-sided.

This poster from England uses symbols and colors to create a mood. It targets society as a whole. The skull and crossbones is a widely used symbol for poison and that is a strong statement on a poster.