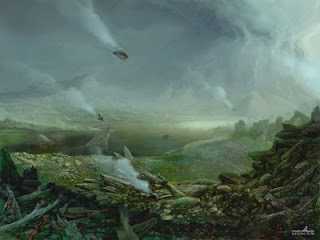 The images shown in chapter 4 depict some literal scenes from the book of Revelations. In the various versions of The Four Horsemen of the Apocalypse there are four horsemen that visually represent each of the four horsemen of the apocalypse; death, pestilence, war, and famine. These are usually represented as angels or men carrying a symbol, or having the appearance of what they represet. The more recent images of the apocalypse are more secular than religious in nature. These images often show causes for death, pestilence, war, and famine, and the results of these things. The four horsemen are more abstractly represented. For instance, in the image at right (courtesy of msmaverick.blogspot.com) one might see in this barren landscape, war, death, pestilence, and famine, with out a symbol to represent it.
It is interesting that even though the imagery is different, the subject matter is still the same, and that the idea of an apocalyptic ending to the human race is still very popular. Perhaps this is largely because it is difficult to believe that the human race could simply dwindle away or last forever.
Posted by Sarah C at 10:26 PM