Apocaplypse Then and Apocalypse Now: One in the Same 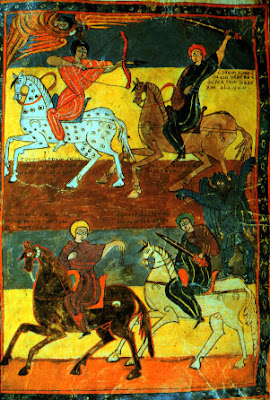 Since the creation of the the bible, there have been many interpretations of the Apocalypse. Many of the earlier depictions of what the Apocalypse was or what it represented were influenced by what the artist thought that God would do to any who did not believe in him. Let's examine the painting to the right. This painting is known as The Four Horsemen of the Apocalypse from the Beatus of Fernando and Sancha, created in A.D. 1047. Beatus saw the Apocalypse with the first horseman as God's envoy, whose arrows pierced the hearts of nonbelievers.
When looking at the detail in this picture, and many others of this time the vivid colors and lettering cannot go unnoticed. You see, unlike paintings that have been created in modern times, almost all paintings created during the A.D. period contained frames, images of animals, some with hybrid animals and humans, text in capitals, and depicted battles. During this time, the use of reds and bold colors

seemed to be a requirement for Apocalypse paintings. 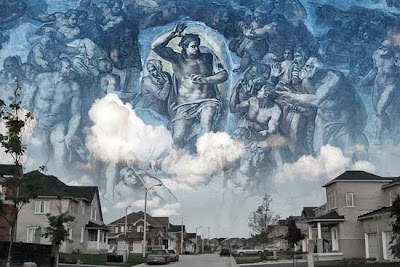 Now, this is a painting created during modern times of what the Apcalypse means. Unlike earlier times, death is now represented by deep dark colors. The usage of bold, bright colors no longer comes into play and the usage of lettering and written messages cease to exist. You can see that there are clearly no frames outlining the photo and that there are no weapons displayed. There are more humans displayed and it seems that the photo covers every inch of the canvas. The photo to the right is by an unknown artist created in 2004.
In comparing today's depiction of the Apocalypse with the ones of earlier times there would appear to be many differences, but just as they are different they are the same. It seems that with the loss of coloring, frames, and battles the usage of humans, hybrid species, and the paintings representing the surroundings of the artists stills plays a part in their design. Back then, they were surrounded by horses, spears and animals and the lost of a home was not uncommon nor was it thought as the end of the world. However, if you were to cut off their horses used for transportation and food supply and if there were no worriers for battle, that would indeed effect their existence. Now a days, if you were to destroy our cars and homes, you would have affected our existence. In comparing the two photos, on thing is for sure; these photos depict what the end of the world would be during the era they were created.
Posted by Quin Allen at 10:18 PM

The second image is Michelangelo's "Last Judgement" from the Sistine Chapel superimposed over a modern-day neighborhood.