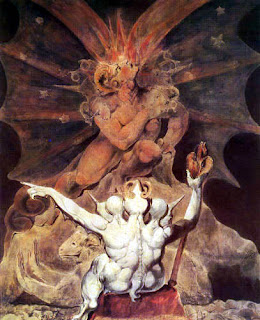 William Blake was a commercial artist who was highly talented in poetry, painting, and illustration. Some of his works are still state-of-the-art. It is hard for me to decide whether he is a fine artist or illustrator. I would lean toward considering him as an illustrator, rather than a fine artist.

In his early life, he was trained to be a professional engraver. He designed his poems to form a single picture. In each page of his books, he created a method of etching a hand-printed poem and an accompanying illustration. Blake's method of "illuminated printing" was used in his most famous works, such as "Songs of Innocence", "Songs of Experience", and "The Marriage of Heaven and Hell".

Blake colored each page by hand, each copy of a work was planned in a different color scheme. Although Blake inherited certain techniques from the illuminated manuscripts of the Middle Ages, he created his own unique style. Blake's conception of the beautiful and successful book was one that must be a complete unit, which means the lettering, the decoration, the illustrations served as the accessories of a single idea. This single idea is Blake's vision - his deeply meaningful view of the world.

Blake asserted the creative freedom of the imagination within his work and makes a new design out of it. In this perspective, he worked like most graphic designers in the Modern Age. Not only that, he drew from his imaginations and from the inspiration of his poem. All the above characteristics fit the idea of what an illustrator is. However, I do feel that addressing him merely as an illustrator is too narrow a view. For me, he is a true genius.

Posted by Jingcheng at 7:53 AM