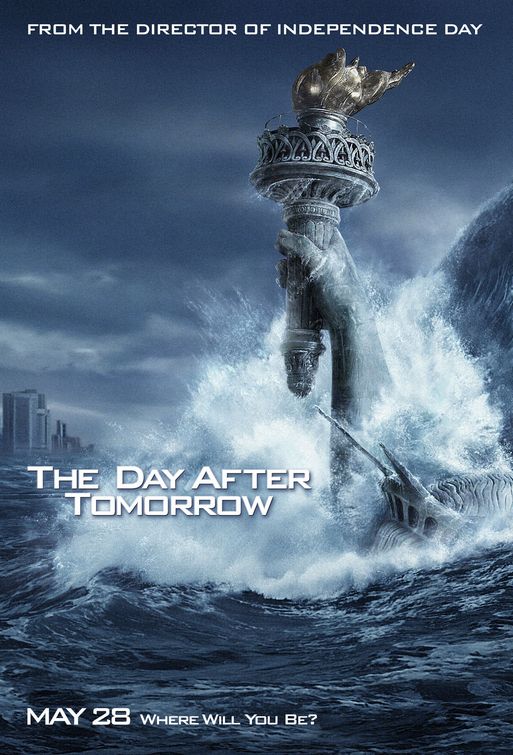 It's a common theme in Hollywood to depict the end of the world as the backdrop for a display of drama and true humanism. Wether it be an asteriod hitting earth, killer floods, or zombies, the effect is the same: when people think the world is ending, they show their true side.

In 776 A.D. people were familiar with the apocalyptic idea on a far more serious and personal level. Rather than being open to speculation, everyone knew that the world would end when God wanted it to, and that it would happen precisely as the bible foretold. As time went on, humanism urged people to think of more logical causes for world destruction. The idea of humans causing thier own destruction is typical now in movies like The Day After Tomorrow. However, "mother nature" is still depicted as an uncontrolable, unexplainable force to humans, much like "God's will" was thought of in older a pocalyptic views.

Images depicting these events in the old and the new contain design elements contributing to their effectiveness. In 1047 A.D. scribes illustrated the four horsemen on bright contrasting colors, but somehow floating in space. In the context of the time, these conflicting colors created a distraught effect. Today, with the movie poster for The Day After Tomorrow, the monocromatic color scheme communicates a deadness of space. This feeling is particularly effective because of the statue of liberty, a symbol of modern civilization, being submersed in the grayness.

While the older views of the end of the world are typically the same stories from the bible, retold in an artist's interpretation, the apocalyptic stories we see today are often a mix of cliched ideas derived from humanism and science. For example, with the advent of the atom bomb, comes the fear that it will kill us all. With discovery of the dinosaur extinction, comes our fear of the same fate. Even though these new ideas make their way into drama, so does the old idea of god's will and a "predestined fate". Using religious icons, apocolyptic stories can add a very familiar fear - the one we had to begin with.