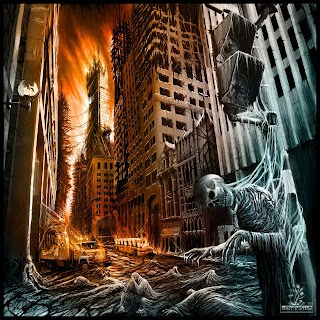 I have read and find many of the journal entry's very interesting as several of them share similar views to my own. That being said, here is my two cents on the subject. Most all of the apocalyptic art covered in chapter 4 of our book and in general revolved around “The Apocalypse”, meaning, the end of the world due to biblical reasons. In my opinion, this was due to the fact that a lack of scientific knowledge caused early civilizations to attribute everything that happened on earth to God. God was thought to be responsible for everything from the sun coming up in the morning to the Black Plague.
The Renaissance brought about the beginnings of the scientific explorations that continue to this day. It is these explorations and discoveries that have shifted our ideas of the very meaning of “Apocalypse”. Art as well as our ideas have split into two distinct directions with regard to this subject. Most Christians, and other faiths for that matter, still believe in “The Apocalypse” as the bible describes it. However, many people now take a more scientific approach to the idea of “An Apocalypse” caused by the actions of mankind rather than a God. By this, I refer to the more modern art depicting the end of man resulting from the use or releasing weapons of war. Within nearly every art form, from graphic to film and everything in between, one can find a common thread in the fear of biological or nuclear catastrophe resulting in “An Apocalypse”.
Posted by Mark Adams at 10:51 PM