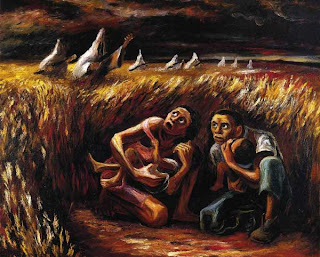 My first subconscious response on this question was: "It would be nice". Artists do not produce the goods in general meaning, work of art is not something you will die without within couple of days. One cannot call a painting or a drawing an absolute necessity for every individual. However it is something a healthy society cannot exist without, not only because we learn a lot about the past and present through the works of art, but it also is a powerful tool to shape public opinion. Here we have come really close to manipulative features of the art works, which are not necessarily destructive. Monopolizing the art, on the other hand, that would be destructive. Obviously, if the Government commissioned all the art, people would have seen world from the only one point of view, and they would stop think, argue, agree or disagree... Finally, having lost touch with objective reality, by loosing variety of artists' opinions, society became aggressive and overprotective - intolerant.

Coming form one of the post Soviet countries I have seen lots of works of art that have been done on the government demand. There were periods of time when public could see the art works only after they were discussed and approved by special ideological committee. The art itself came out really powerful if the artists believed in the ideas behind their work. Despite the fact that art was created under totalitarian regime it often promoted anti-racism, feminism, and other virtues. However the opposite practice also should not be forgotten like extirpation of those who did not share approved opinions and were trying to show oppression and ugly side of life. The good news is, the history full of examples when artist working on commissions still were able to express and share their own beliefs. 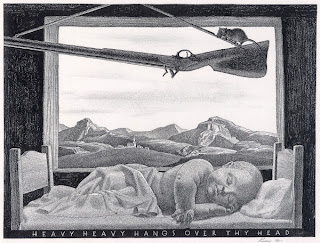 The question "Whether or not should Government fund the Arts?" is ambiguous by nature. It raises more ethical questions like "Should artists compromise his or her personal beliefs?", "Will it change the identity of the artworks?", "How would be depicted the confronting issues of War, Economy or Race&Ethnicity?", "What will happend with the social art?" ect. Those questions are personal for each individual artist and I hope everyone has freedom to decide, but I am sure that true artists would create despite the money or popularity it could potentially bring them.
Posted by Olga Ledyan at 6:41 PM

"I am sure that true artists would create despite the money or popularity it could potentially bring them." Indeed.