Ever since the Universe was created from the chaos, people are constantly trying to put things in some sort of order. Especially while talking about somebody or something that dem 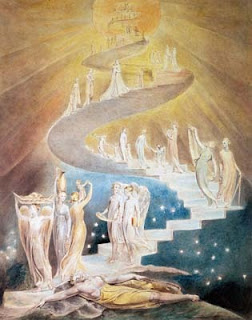 onstrates the true genius, like William Blake’s works. Despite the fact that both artist and designers have been using works of William Blake as an inspiration, the questions like “Whether Blake’s designs or poems are more important?” or “Who was William Blake fine artist or illustrator?” often occur.

In order to understand the meaning behind any artworks one first has to explore all the circumstances that may be relevant. Blake lived and created in “an epoch of typographic genius”. It was only natural for him or any other artist to be influenced by the powers of new invention. In some cases Blake’s choice of materials and subject matter can be explained through surrounding him world of great technological and philosophical changes. He strongly sensed and depicted the spiritual atmosphere of the time he lived in, learning from dead as well as living artists.

David Erdman in his ‘The Illuminated Blake’ points out that Blake identified himself as “Author and Printer” in his first etched title page. Blake worked as a writer, engraver, painter, publisher, illustrator, etc. He was trying to share his deeply meaningful thoughts and impressions directly from the author to the reader and spectator by using all his skills and inventions. Blake was able to control each step of production with an effort to create harmony between forms, colors, lines, and words according to his own aesthetic perception. His works show a great deal of devotion to his principles and mystical viewpoint.
Even though from all the evidence I lean toward considering Blake as a fine artist, I wonder if one can simply respect and appreciate his work without trying to put certain labels. Especially since Blake himself used holistic approach in his works. I feel that two given definitions are too narrow to enclose Blake’s personality and the artistic heritage. The true genius of William Blake is in his unique symbiosis of different skills like, for example, painting and poetry. Similar question may be asked about daVinci as an artist and a scientist, I would say that both men were geniuses.
Posted by Olga Ledyan at 10:53 PM