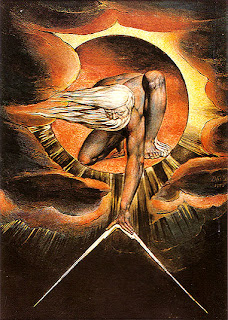 Many people are not always well versed in many different things or skills. William Blake is one of the exceptions. Not only was he considered a poet and a printmaker, but he was also a painter as well. During his lifetime he was not considered to be a very recognized artist of his time, but eventually after his death, his work in illustration was much more appreciated.

I think that anyone that can reproduce something on a piece of paper, carve it out of word, rock, sculpt it or create something it is fine art. Blake’s work is obviously fine art, even though he did many of his images for books or for visual aids to his poetry. After viewing some of his pieces I noticed that his work was obviously ahead of his time. I feel that anyone who has pieces of work that appear like they could have been done by a person in today’s standards is a talent way ahead of their time. After seeing this work, I noticed that Blake took the art he was producing to a different level than the people and artists surrounding him.

I think to sit here and define Blake as anything other than a true fine artist would be an insult to his work and him. He obviously was a brilliant man with talents, not only in the world of art, but also in the world of poetry as well. This makes him a true fine artist, in my opinion. I think that his work stands the test of time and proves this.