Comparing Apocalyptic images Past and Present

(Four Horsemen of the Apocalypse
from the Beatus of Fernando and Sancha.)

Faithful people in medieval times considered life to be a prelude to eternal salvation. Many still believed in supernatural explanations to natural phenomena that wasn't understood including eclipses, earthquakes, and famine. Most believed in the destruction of the earth as foretold by the Biblical Book of Revelation. Many considered the year A.D. 1000 to be the end. The Spanish monk Beatus wrote a frightening interpretation of this event in A.D. 776. The book included images of destruction that couldn't be overlooked. And on New Year's Eve A.D. 999, many Europeans gathered to await their final judgment. As the new year arrived and nothing happened, new interpretations of Beatus's commentary were made. Honestly, I would have probably lost faith after sitting on my rooftop stark naked, cold, and embarrassed....But thats just me.

All kidding aside, I'm sure these apocalyptic images played a large role in people's faith in earlier times. Most couldn't read. And a picture is known to be worth a thousand words. I'm sure the simple mystery of these images scared people into submission.

(Catostrophic events as portrayed in the movie"The Day After Tomorrow") 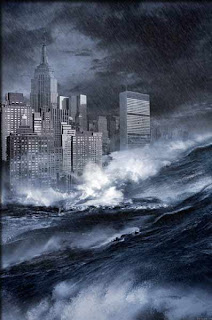 In today’s world, the images only seem to get worse. With the advancement of technology, one can actually picture themselves in catastrophic events portrayed by artists. The images seem to be more real than ever. This can be the ultimate tool in converting non-believers as well as opening one’s eyes to what they might be contributing to.

I think that apocalyptic images have done what they were set out to do since the earliest times. They portray images that get people to think deeper and contemplate life and its consequences. They also create a “what if?” mentality. The images really get you to think. Without them, I believe most people would take life for granted as they so often do.

Whether its for the sake of religeon, or to just create an awareness of how we actually effect the world individually (and as a whole), Apocalyptic images are necessary in keeping civilization in order. Granted, I don’t know if the four horsemen will actually fly out of the sky and wield death and destruction. And I’m not sure if what these religions have written is true. But because of the advancement of science and studies, I do believe that we are destroying the world and its resources. And if we don’t try and correct it on a personal level, the images that we see (pertaining to global warming) could become more of a reality than they already are.
Posted by oscar felan at 12:09 AM