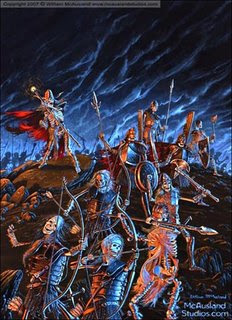 When one hears the word "APOCALYPSE" images of the end of the world, doomsday comes to mind. No where are these images more vivid than in art and graphic design. From the early days of art up until modern times artist and grapic designers have foretold the end of the world in graphic and sometimes frightning ways. All in an attempt to drive people toward the church.

On the last day of the year 999 a.d as the first millieum was ending, people beleived the end was near. They believed that Christ was about to return to sit in judgement. Many flocked to the church. Many Europeans spent the night on the rooftops of their home naked awaiting the final judgement. When the night had passed and nothing happened, themasses went about their daily lives as they did days before. Yet artist
continued to paint images of dooms day.


It is understandable why people would believe in this event. Many of the early writing like Revolations in the Bible fortold the end of the world. From Revolations, many books inturpeted prophecies and translated them into illustrated works. "The Commentary of the Apocalypse of Saint John the Devine" by the Spanish Mong Beatus, written in a.d. 776 was one of ther early illustrated works. Here the graphic artist added to the text with their portrayals of events such as the four horsemen of the Apocalypse. In Beatus of Fernando and Sancha in a.d. 1047 the four horsemen are mounted in different colored horse that seems to be rearing up on their hind quarters. With the horsemen are two figures, one possably the Archangle Gabrial and the other Satan. This vivid illustration helped to spread the word of the church to those that lacked the ability to read, which at that time was many.

Today's graphic illustrations of the same subject appeals to a different audiences. Works such as William McAusland's Skeleton Legions, (pictured above) apeals to people with a more diverse taste. The rich colors and sharp details that makeup this a very appealing work of art. The differences between "The Four Horsemen of the Apocalypse" and "Skeleton Legions" are stricking. The tools that were used in the eleventh century were primitive by todays standards. More refined tools of today enables the artist and graphic designer to creat and more refinded piece of art and print it in mass quanities for distrabution to more art lovers to appreciate. This distribution was impossible in the eleventh century. In that time the illustration was painted by hand which would take days. It would only take a machine minutes to print.

With the tools of the modern graphic artist has at his command can produce more brilliant detail in the designs of Apocalypict art.
Posted by mike eckels at 11:45 AM