William Blake; Poet, painter, print maker, demon summoner, and illustrator. It is evident that William Blake had an apocalyptic view point, as well as a love of radial design structure. While his ideas and actions were radical and thought "mystical" he truly was more along the lines of an illustrator. I'd say an illustrator dancing with the macabre of the religious world, while making whimsical poetry about tigers. OK So maybe not so much an illustrator as a Jake of all trades. It must have been necessary though, he created so many demonically insatiable characters to capture the worlds attention. Yet he did this with a fundamental design structure, much more talent was involved then just illustration. Such images as, Whirlwind of Lovers, Red Dragon, and death on a pale horse, all have a Radial design to it. The eye is drawn to the middle, and then it shoots out in all directions. Almost like a pan out shot in a film. Lest I forget, there is of course the movie red dragon in which the serial killer known as the tooth fairy is possessed by the ghost of the painting Red Dragon and kills people. Perhaps the makers of the movie knew that William Blake's satanic powers worked even after death. The picture is of the Tooth Fairy and the painting the Red Dragon. The actual name of the painting is The great red dragon and the women clothed in sun but, Red dragon rolls of the fingers and onto the board a little easier. So in summation; I would have to once again jump on top of the fence and dangle both feet on the sides, I live in the world of grey. Blake has technical illustration enhancement skills, and that skill enables him to create fine works of art; and serial killers. 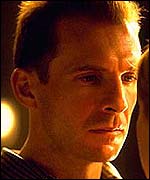