Last Day of the World 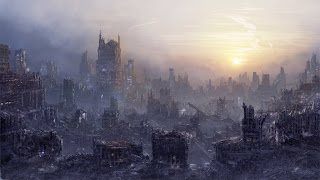 My understanding of apocalypse is that it is a term to describe all the disastrous things that will happen when Jesus comes to the world again. However, I notice that the meaning of this word has changed since the 2nd century A.D. In the 2nd century A.D., apocalypse referred to the process by which God sent his hidden messages to the prophet or apostle. This message was often about what was going to happen on the last day of the world. Today, the word apocalypse refers to the scene of the ending of the world. The different meanings of apocalypse are reflected in the art of these two periods. In medieval era, apocalyptic manuscripts involved several elements. They described the prophet’s dream, God’s vision, and the punishment mankind is going to receive on the last day. Angels and symbolic figures often appeared in the apocalyptic manuscripts. In the textbook page 52, figure 4-13 – “The Four Horsemen of the Apocalypse” is a typical example of apocalyptic manuscript in the middle age. The four horsemen are symbols of War, Famine, Pestilence, and Death. These are the things which will happen on the day of Jesus’ return. On the last day, all mankind will be disrupted. The apocalyptic manuscript served as the message of revelation. In the modern world, apocalyptic graphics more often emphasized how the world looks like on the last day. The above image is one example. It shows one scene of the end of the world.

Posted by Jingcheng at 6:22 AM