How the plague affected artistic production in the 14th century Italy? 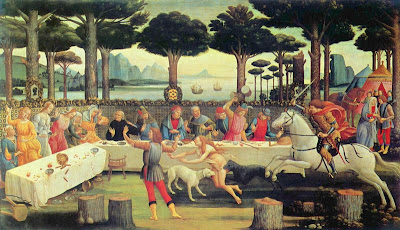 The Story of Nastagio degli Onesti. Tempera on panel.
Museo del Prado, Madrid, Spain
Decameron, painting by Sandro Botticelli from 1487
The Black Plague turned out to be one of the deadliest epidemics in human history. It has not only killed about thirty to sixty percent of Europe's population but it also caused some economical and social changes in the medieval world. Plague weakened the power and position of the Catholic Church in Europe. Lots of monks and priests were dead and people who replaced them did not have the necessary experience. As well as some people stopped looking for the cure from God and became more cynical forward church's promises. Small populations meant few taxes. Employers had to raise the salaries of the employees to attract new workers. The BlackDeath led to some progress of medical science in the medieval era, which awaked the great interest for anatomy and human body.
It is generally known that artists are usually the very first ones to respond on any social change not mentioning a true disaster. "This disaster prompted the commission of religious and devotional artworks" (Kleiner, Mamiya). Some of the artists were hired by the Church that was desperately trying to reestablish it's former power, these artists elaborated further the Gothic style. The others wandered away from religious pictorials of Byzantine tradition, showing likeness of the dead bodies, people socializing with corpses and skeletons, and having great deal of emotional impact - for some it was a revival of Greco-Roman styles. In both cases the way in what artists have seen and depicted the world has changed. The chang e in art during the Plague epidemic demonstrates shock, depression, and the grim reality of the world.
Ars moriendi ("The Art of Dying")
"Temptation of Faith", Engraving, 1450
Ashmolean Museum, Oxford University
To be completely accurate, the main changes in art began after four most deadly years when lots of artists were already dead and some pictorial boundaries were already broken. Grief is a long process. Artworks of that time show reevaluation of the old values, and search for the new more happy ones. Tendency for naturalism and humanism has been appearing in painting and architecture more and more often. So to some point the Black Death could be seen as a factor bringing the Renaissance and even the Reformation in Italy and Europe.
Posted by Olga Ledyan at 10:35 PM