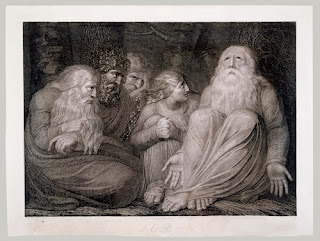 I’m not sure you can separate the two in William Blake’s case. Our book deals mainly with the illuminated printing of Blake. However, there are examples of his work that should be characterized as art. If taken in the context of a book, perhaps he is just an illustrator, but in the context of the work itself, I think you would have to consider him a fine artist.

His work in the Song of Innocence is more of the illustrative nature. It combines art and text to present not only a title page, but an image of the innocence of love and how two people interact with each other. There is a sense of brightness that the emotion brings to people’s soul. The man that is shown in the work represents the ultimate in devotion to the lady in his life. There is more to Blake’s legacy than just this example.

I’m not sure if you can define illustrators without including the term fine artist. Some are just that, illustrations, but many would argue that in some instances, others are fine art. His engraving “Job's Tormentors” should be considered a work of fine art. His unfinished work for Dante’s Inferno suggests that he was considered by some to be an artist more than an Illustrator.

Maybe Walt Disney is considered just a cartoonist instead of an artist, but Mickey Mouse is the most recognized character in the world. The perception of the person viewing the work should be what determines whether a person is a fine artist or illustrator. In some cases, can you even separate the two?
Posted by Rodger Austin at 12:54 PM