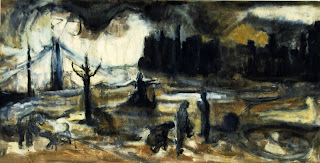 The early apocalyptic messages compared to the ones of today differer greatly as far what is depicted, but the message is the same. Comparing the four horsemen of the apocalypse from the beastus of fernando and sancah, to An Apocalyptic landscape these differences start to become clear.
First off, all religious symbolism in Apocalyptic landscape has been removed completly, and the emotional emphasis and meaning is put more on color, and brush work. The paintings colors are all muted, and have no real warm colors. Everything seems to be distant, and unclear. The over all feeling is a very melancholy. Buildings are generally monochromatic only having enough detail to make out what it is, and the colors have an over all dark feel to them. Compared to The Four Horsemen, this image has starking contrast.
The four horsemen is a obvious reference to biblical scripture of the apocalypse. The four horsemen ride across the sky, each holding its own unique symbol. It tells more of a story of what is to come from the horsemen rather then depict much emotion. The over all emotion on the horsemen seems to be neutral only displaying an object to show what the horsemen is representing (war, famine, pestilence, and death). The line use is very flat, and little space shown. It is not expressive at all like the landscape. Colors are used more for representational use (such as the color of the horses) to add meaning instead. The Four Horsemen also has a more asymmetrical composition. Its almost purely representational. It seems to fall short of enticing the viewer to grasp much of it beyond that.
Posted by modle at 10:47 PM